Still trying to catch up from last seasons festivities and also maintain this seasons. Tapout was a First Ascent I did last year thanks to Alli Rainey and Kevin Wilkinson who spotted the magnificent pillar in a new area they were developing for Rock Climbing. I quickly packed the car and tempted Tanner Callender to come join me with promises of an FA. We found the pillar and it was very impressive but was not connected at the top and had a huge window in the middle. I contemplated for over an hour sizing it up and depending on what side you looked at it from it looked good or it looked bad. The weather for the next week looked nice and cold so we opted to come back next weekend to claim our prize.

Mulkey testing the pillar for sound and vibration.

I climbed up the pillar a ways to see how it felt and it made a horrible drum sound with every swing. 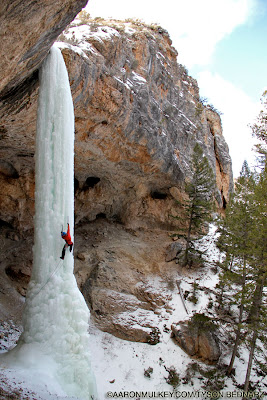 Tanner and I returned to the area with Chris Guyer and our Photog Tyson Bednarz. The pillar had grown tremendously and the connection point was super good now. Below are a bunch of photos taken of the route! You can also see this climb featured in The Regualtors Video Episode 5

The pillar Tapout was great, not hard but incredibly gorgeous!

Kevin Wilkinson working on his projects. This area was named the Octagon for it shape and serious nature of climbing. One of the cooler places I have ever climbed.

This cave is in the climbing area and is pretty damn cool. You had to crawl into this room and then it opened up into a massive room and went awhile back before you had to crawl again.

Someone discovered this cave a long time ago and celebrated well ! This can was before my time im sure of that. I havent seen a pull top like this ever. ha

After claiming Tapout we rushed over to one of the other climbs in the area up Ten Sleep Canyon and it began to nuke snow on us but the climbing was great and we had a nice full day.

These are to ride right ?

Thanks to Tyson Bednarz and Tanner Callender for the photos.

One of my favorite days of climbing last year!