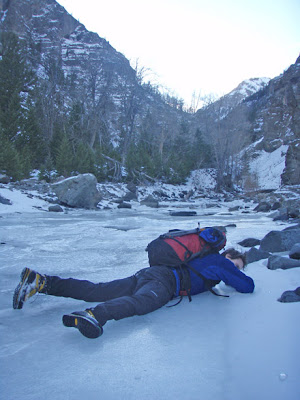 We were minding our own business playing air hockey after a long day of inhaling chalk dust at our local climbing comp when the bouncer at the bar steps up to this machine that looked like it should have been and the county fair with a some red neck flag waivering above it. You first feed a it a dollar and then the ………drops down and you hit it as hard as you can and then the numbers on the screen race around like you won the jackpot and it reads out a number of how powerful your hit is. The bouncer looked at us and says “hey skinny white boys with toothpicks for arms beat that shit” ….ok he didn’t say that out loud but the look on his face did. He tells us he has the high score as he walks away though. We all agreed how stupid the machine was and what a waste of money it was? Why would people spend a dollar to hit a bag to try and prove how manly they were? 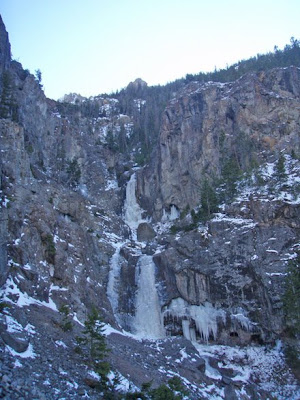 So we spent about $15 to $20 dollars each on it and walked away rubbing our joints and sore muscles with bruised egos and empty pockets. We did however get within 26 points of the high score. So this whole situation got me thinking how all of us do something in our lives to prove ourselves or set us apart from the pack…or at least we all try to. For that bouncer, his high score meant he was the strongest man at the bar and for us it meant we didn’t want to piss him off. 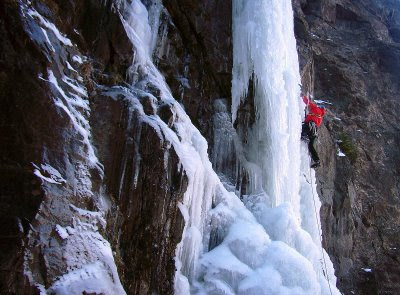 Aaron Mulkey gettin into the goods…

Getting to my point of the whole story finding first ascents is my thing. It’s what I love. It’s what gets me out of the car when it’s blowing 30 mph and 10 degrees outside. The only problem is that my partners stay in the car but some of them do blindly follow me every once in awhile. 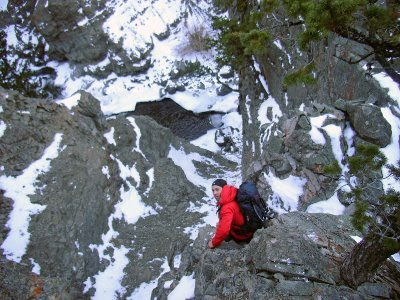 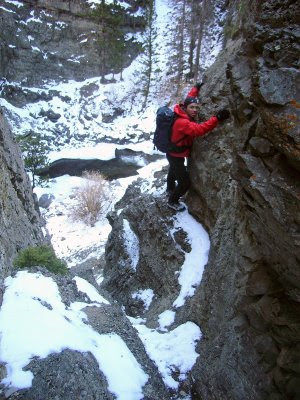 Joel Anderson was my blind partner the next morning and all I told him was we were going to get a first ascent. I had known about it for many years but just never found the time for it. We woke up with warm temps and great sunshine for the long hike in. I told Joel it was about an hour and half walk in and it took 2 so I wasn’t far off. With little snow and warm temps so far this winter I knew the hike in Cabin Creek would suck.

Joel pulling thru the V15 boulder problem in Cabin Creek 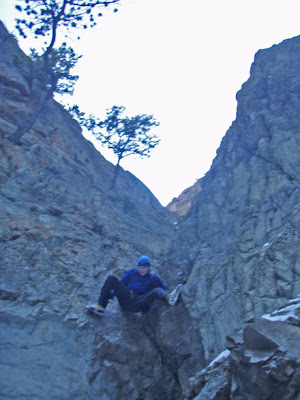 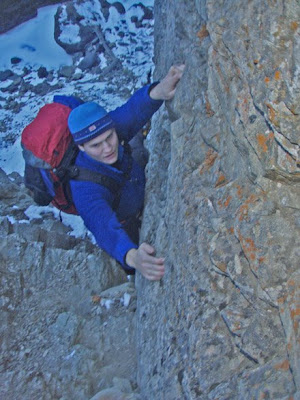 You have to cross the creek about 30 times on the way in and that raises the potential wet boot factor. In one case there is a super sketch traverse that if you slip your going swimming. 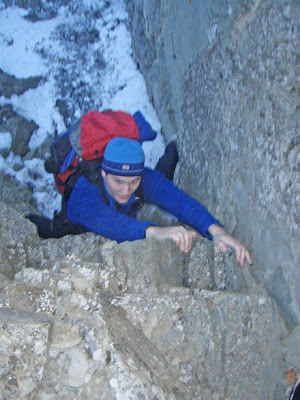 Its good Joel come on…..

A big crystal clear pool of water awaits your moment of bad foot work. Hiking up and around the Cabin Creek waterfall we found that someone had taken the cheat rope to lower down into the canyon, which it also plays a key role in not having to climb v2 bouldering moves on the way out. You used to be able to practice your Batman moves on the way out, which is always good to practice. 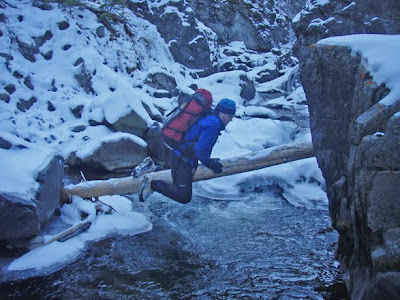 Joel asked me not to post this photo because his girlfriend would be jealous!

As I figured we were able to find a game trail, which led us thru the thick timbered hillside. We were psyched to reach the base of the climb nice and dry. We soloed up thru the first pitch and got to the main pitch we offered super enjoyable with a nice and thin top out to keep it spicy. We ventured above hoping there would be more to climb but it mellowed out to rolling short pitches of WI2-3. 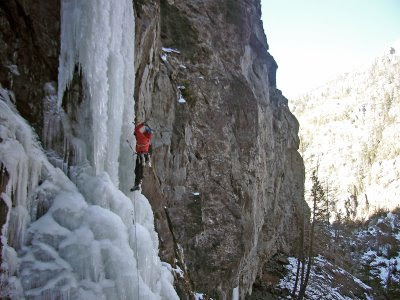 We named the climb Counterfeit Girl (WI4) and were psyched to start the season off with a new adventure. We eventually stumbled our way out of the canyon with only one soaked boot and one ass over tea kettle flail on the ice.