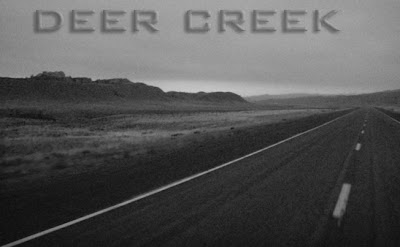 Tuesday I get the phone call from Ben Stookesberry that he is in Casper and going to check out Deer Creek, a run that only a small handful of people have ever seen. It possibly hadn’t seen a full descent in over 10 years since the original boaters that first explored it back in the 90’s. Ed Conning, Calvin Bergstrom and Steve Varland were the first to venture into the canyon years ago and they talked of quality drops and a big water fall that was never ran. 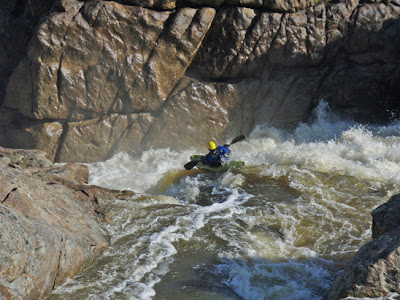 Casper Mike going for it

Until Mike in Casper discovered Box Elder Creek (see past trip report) Casper’s whitewater remained untouched and hidden deep within the local range since the original first descent of Deer Creek. After boating thru Box Elder Creek, Eric Seymour, Gary Edgeworth and I were very interested in what layed next door in the Deer Creek Drainage. Ed Conning never talks much about runs but said there were good rapids and that the waterfall was runnable and that there were some other rapids that they hadn’t run due to running out of daylight and trying to make way thru the canyon. 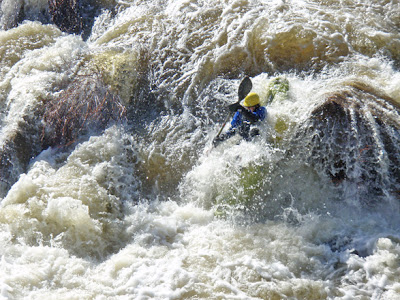 Gary Edgeworth, Eric Seymour and I were packed and ready to go, just waiting for a phone call from Ben that things were good to go. Around 6 I get the call that the road is crappy and muddy and we have to hike and with a 3 hour road trip ahead of us were not sure we are willing to hit the road for something were not sure we can even get to. Everyone bails on the trip and then at 7 I get the phone call from Gary
Gary -“pack your shit get in the car meet you in Shoshoni”
Me- Why are we now going what changed?
Gary- “Doesnt matter get in your f?%$#@ car tell you on the way to Casper”
I start to ask him another question he hangs up!

I make a quick call to our logistic and shuttle man in Casper Kenny and he is out of town but offers up his house for a place to crash which saved our butts since it was nice to have a nice place to roll into at midnight. I met with Eric and Gary in Shoshoni and we drove the final 100 miles to Casper arriving late in the night and getting about 5 hours of sleep. We woke around 6 to meet Ben, Mike and Alex at the Flying J for an early mission on Deer Creek. Mike was a key help on logistics of the run and his local partner Alex joined in on the run also. 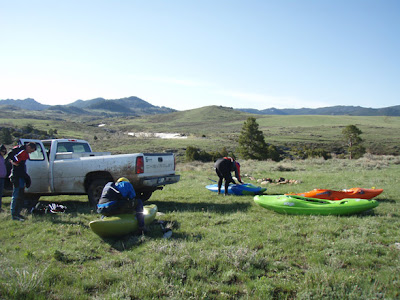 We were able to make it all the way to the put in concuring some serious class 5 mud bogging roads. We were psyched to have Mellisa as our shuttle driver but felt quite bad that she might have the toughest task of the day, driving the truck back out on her own. 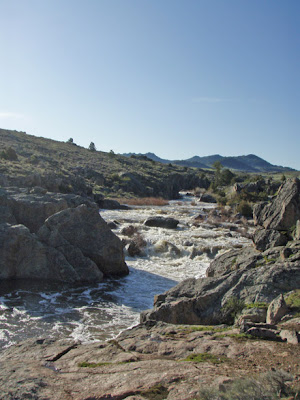 The put in warm up drops! ha 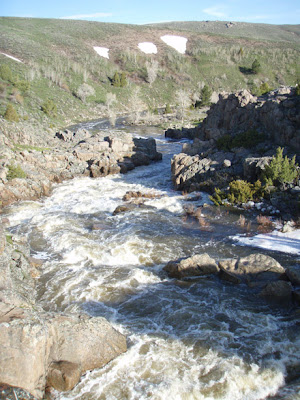 The warm up rapid end 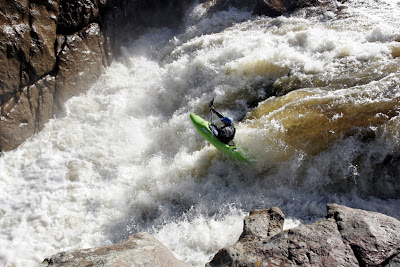 This is me just about to get a beat down. The meat of the put in drop was big and you can see the mist rising from this drop on the drive in. It raises the heart rate just a little. This drop is in the middle of the 2 photos above and giving the warm up rapid some teeth. It was a great way to wake up in the morning. Eric Seymour Photo. 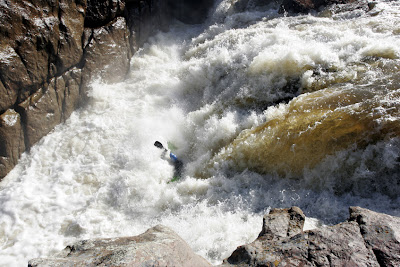 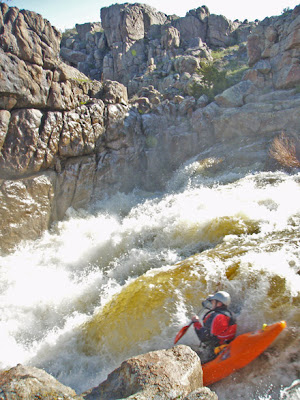 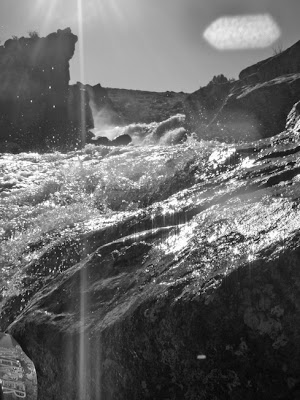 Looking up at the meat of the warm up rapid 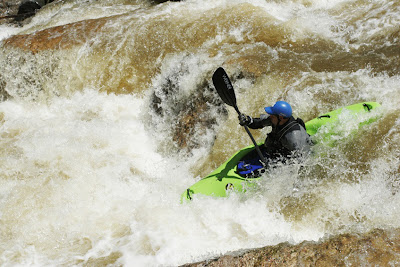 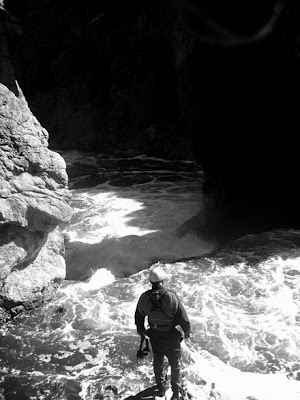 After the initial warm up drops things mellowed out for a bit and then started to get steep with quality read and run 4-5 untill we reached the big falls. 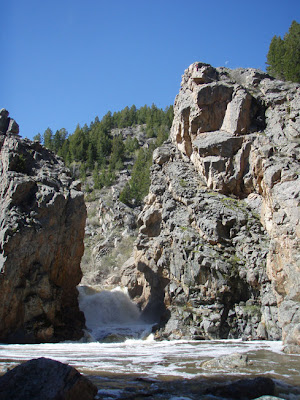 All of us other then Ben decided we wanted no part of it so we started to set up safety knowing Ben had been thinking about this drop the entire week and he wanted it bad. In the photo above you can see him scouting the entrance from high above on the rock rim on the right. The falls had a weird dip and foam pile at the top but watching been run it made it look easy. 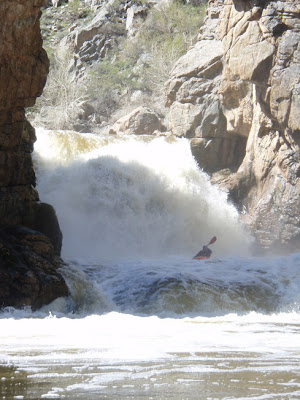 Ben Stookesberry emerging from the falls, he completely disappeared in the falls so neither Eric or I got any shots of him in it. The hole at the bottom was pretty sick on the second tier. 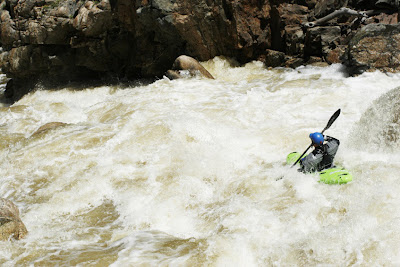 This was a great drop and Eric was able to get a sweet shot of me in the entrance. He gave me verbals for it and as I dropped in it looked bad but it ran very well. Eric Seymour Photo 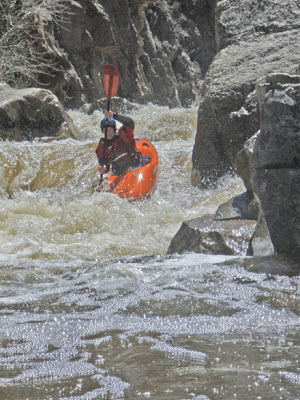 Ben in one of the many drops after the falls 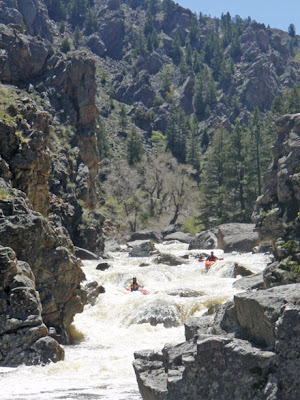 Ben and Eric in another quality drop in about the middle of the run.

After the above drop things picked up and started to get steeper and the rapids got longer. 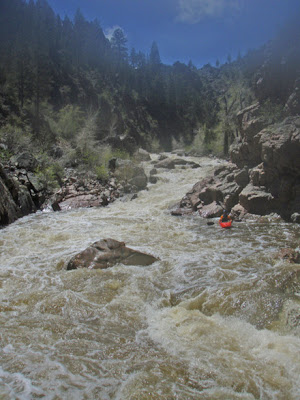 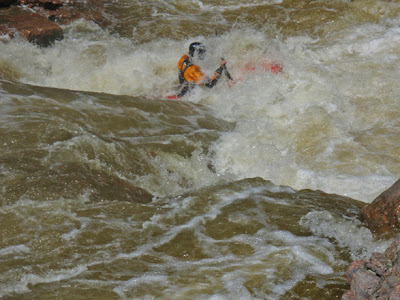 I wish I had a picture of the next big drop and man eating hole at the entrance. I remember sitting in the eddy and Ben hopped out to look at it and he just had this sick look on his face. He then proceeded to get out his camera and told us there was a huge whole that we were going to have to plug. He then waves a piece of underwear in the wind and lays them on a rock and I look at Eric and Gary and ask what does that mean? Eric says it means were going to get our shorts cleaned! urgh urgh…..

As Eric dropped in all I could see was a Super Hero doing bow stahls for an extended period of time, this was not promising!
We ended up all having a different experience in the hole but manage to make it through without carnage. 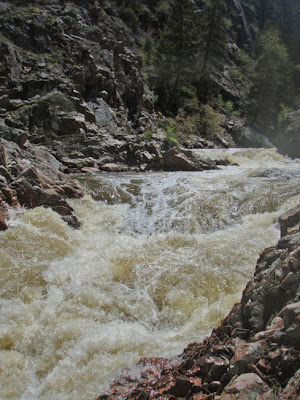 The entrance to the Vortex which I completely screwed up by missing the eddy on river right after the initial drop. I rolled up just in time to watch my eddy go bye and decided to just give it and all i could here was Gary yelling at me to go left and Eric scrambling for a rope since I was about to probe one of biggest holes on the river. The Vortex named by the original group is a big squeeze short falls into a nasty violent pocket. I went deep and rolled up almost in the hole but managed to get my arse out of it before I did some loops. As I hit the eddy below I looked up and smiled and the look on Ben, Eric and Garys face was priceless. I was glad to be on the other side and they were glad someone probed it but weren’t excited about still being above it. It was one of those drops that anything could happen. 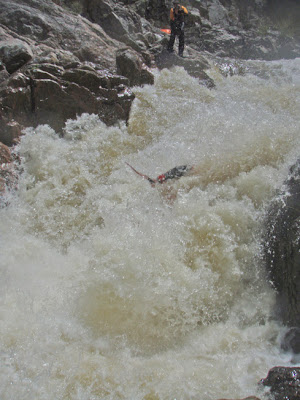 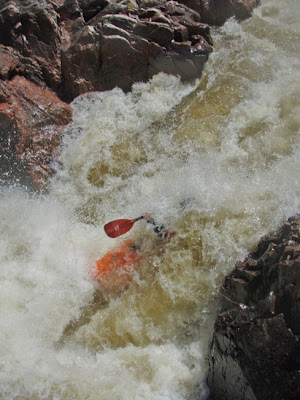 Ben trying to boof it…. 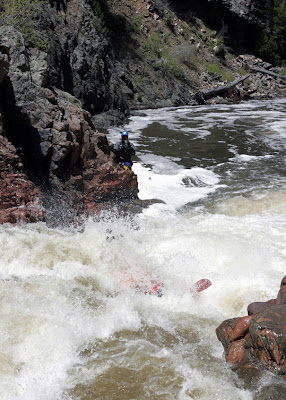 Another angle Gary getting some. Eric Seymour Photo 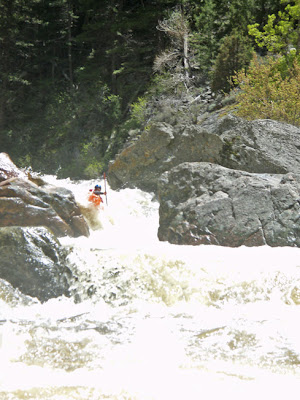 Ben getin after it 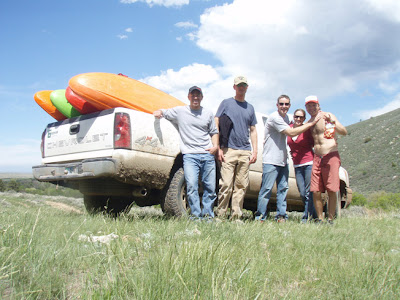 WOW what a great run and good crew, the bottom half of the run got stout and I wish I was able to take more photos but we just kept rolling into to some big drops eddy scouting some and others ahhh……… I guess we followed Gary ha!

Getting the run done was awesome, coming around the corner and seeing that Mellisa made the shuttle was priceless! Its not often that the shuttle driver get to the run shiz too! Thanks Mellisa … Also big thanks to Mike in Casper!

Here is a link to Eric Seymours TR- Click Here